Search for the Best Cherry Pie

Cherries are synonymous with Door County. As you travel up and down and across the Door Peninsula you will be hard pressed not to pass a cherry tree orchard. In late July and early August cherries are ripe and ready to be harvested. Cherry tree branches are dotted red with ripe fruit and even look a little like Christmas tree’s decorated with bright, little ruby red ornaments. 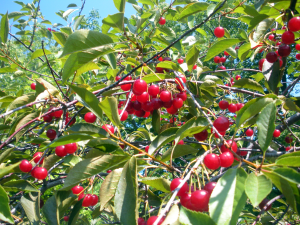 In August of 2014, my family and I stopped in for lunch at the Cornerstone Pub in Baileys Harbor and started talking to our server. We learned that working at the Cornerstone was his part time job and he was a local farmer, and his wife was a dairy farmer. As we talked he shared a few stories about the different produce he was growing, he leaned in a little closer as to tell us a secret, there was a wonderful baker in the area that made the best cherry pies and the pub had one fresh baked pie left, did we want it? We bought the pie, stopped and got some vanilla ice cream, and brought the pie and the ice cream back to the condo for later. The pie was wonderful and we enjoyed a piece after sunset for the next three days.

Fast forward to 2015, this is where it gets interesting. We decided to head to the Falcon Orchard on Route 42 between Sisters Bay and Ellison Bay to go cherry picking. In 2014 we picked about 10 pounds of cherries, for about eight dollars, but we were later in the season this year and the picking was done. We decided to head north about a quarter mile on 42 to Seaquist Orchard. After playing in the rope maze, we went inside to the baking department and started reminiscing about the cherry pie we bought at the Cornerstone pub the year before. We decided not to buy a pie at Seaquist, but to head back to the pub and see if we could get a cherry pie there. 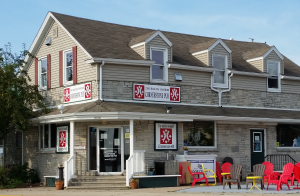 When got to the Cornerstone we learned that the baker had moved on and started her own business and that she was actually on the Food Network show Chopped. Unfortunately, no one could remember her name or the business she opened, just that she was chopped from the show and her business was closed. I asked the waitress if she could recommend another place to get a pie. She suggested Sweetie Pies in Fish Creek, but by the time we got there they were closed. Someone we bumped into in the Settlement Courtyard shopping area there said they remembered the Grandmas’ Swedish Bakery in the Rowleys Bay Resort made a good pie, so we jumped back in the car and were off to the other side of the Peninsula to Rowleys Bay.

We got there in about 20 minutes and found the resort and the bakery, unfortunately they had not made pies in several years. They still have incredible cinnamon rolls and coffee cake, which are very popular. We walked around the resort for a bit and decided to drive back to Seaquist to see if they were still open. They were, we picked up a fresh cherry pie and headed back Baileys Harbor. It was good cherry pie and now we had a great story to share. All said and done we traveled 60 miles to find the perfect Door County cherry pie.

Since then we have purchased several pies including one from Woods Market, Sweetie Pies, The Cherry Pit, and Grandma Tommy’s. All of them good but our first pie from the Cornerstone Pub will always remain our perfect cherry pie.

This entry was posted in Door County, Family Time.

Make A Reservation
Explore Our Rooms
Read Our Blog